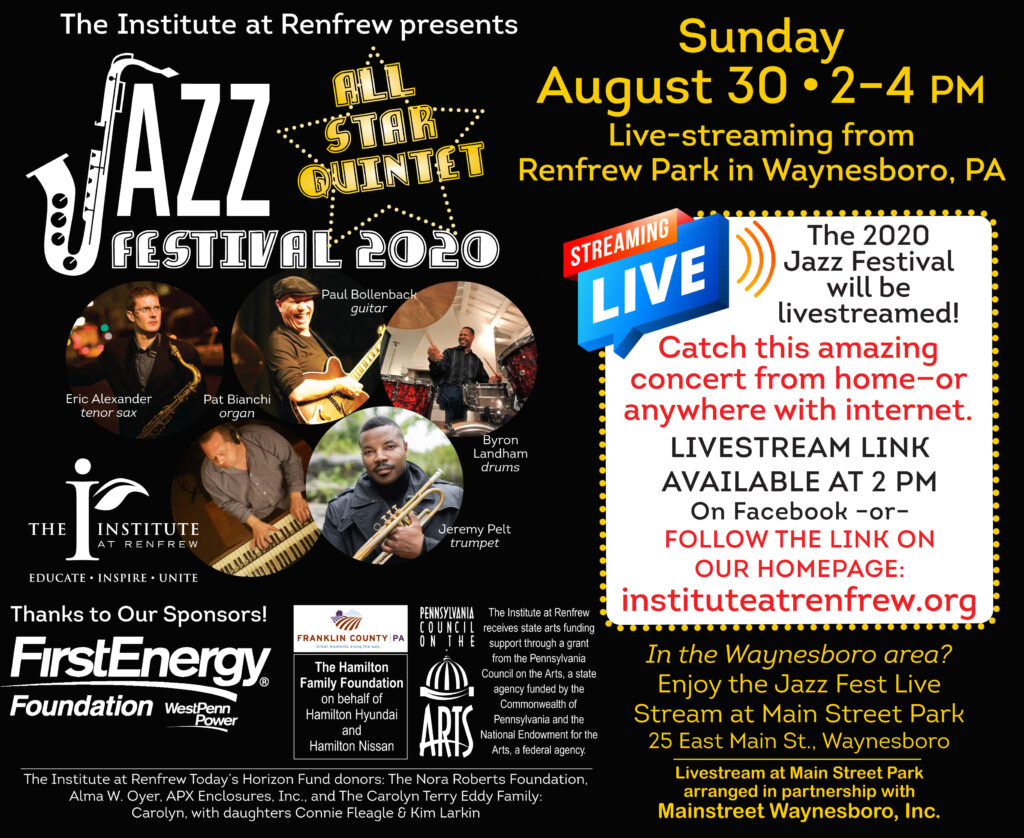 Renfrew Institute’s 29th annual FREE Jazz Fest!
Due to the pandemic, this year’s festival is a limited-attendance event with pre-registration in advance required.

Sunday’s in-person concert at Renfrew Park is SOLD OUT!
However, the show will be live-streamed this year, and you may watch it from the comfort of home….OR from Main Street Park in downtown Waynesboro (25 East Main Street).

Although attendance is FREE as always, we hope you’ll help us virtually “pass the hat” to support the 2020 Jazz Fest!

The Institute at Renfrew’s 29th annual jazz festival spotlights stellar performing artists that light up the outdoor stage with hot summer jazz. An informal question and answer period follows the show. Free and open to the public.

In order to ensure the safety of attendees, band members and our staff, safety protocols will be implemented in accordance with the Green Phase of Pennsylvania’s reopening plan, and that of the venue, Renfrew Museum and Park. Appropriate distancing (6 feet) is required between household/family groups. Mask use is required when appropriate distancing is not possible.

On the lawn behind the Renfrew Museum house. (In case of rain, the concert will be live-streamed from a private venue.)

“Each of these artists is an internationally renowned jazz musician,” said event organizer, Andrew Sussman. “This concert is an opportunity to hear these stellar jazz artists for free in beautiful Renfrew Park!”

Lead sponsor, FirstEnergy Foundation on behalf of West Penn Power, is returning this year to support the event. “We are proud to help sponsor this marvelous concert that brings extraordinarily talented jazz musicians and vocalists to our backyard for our customers and others to enjoy,” said John Rea, Regional President of West Penn Power.

Jeremy Pelt is one of the preeminent trumpeters in the world of jazz. Often compared to Lee Morgan and Freddie Hubbard in their prime, Pelt has performed and recorded with the Mingus Big Band, Nancy Wilson, Cedar Walton, Wayne Shorter, Frank Foster, Bobby “Blue” Bland, Ravi Coltrane, Jimmy Heath,  Rene Marie, Bobby Short, and the Cannonball Adderley Legacy Band featuring Louis Hayes, among many others. He has recorded 17 albums as a leader and has toured globally, appearing at many major festivals and concert venues, and has been voted Rising Star on trumpet five years in a row by Downbeat Magazine and the Jazz Journalist Association.

Tenor saxophonist Eric Alexander has recorded 43 albums as a leader and about 80 or 90 as a sideman, working with such legendary musicians as Pat Martino, Freddy Cole, Cecil Payne, Irene Reid, Charles Earland, Little Jimmy Scott, Harold Mabern, Jimmy Cobb, and Jimmy McGriff. Alexander has earned praise from critics and, even more important, established his own voice within the bebop tradition. He continues to tour the world and play to capacity audiences, and has just returned from a tour of Japan and China with co-headliner Vincent Herring, who appeared at Renfrew last year. He has been a featured artist at countless jazz festivals and clubs and performed numerous clinics for organizations and universities around the world. Alexander currently resides in New York City, where he has headlined at many venues including Lincoln Center, The Jazz Standard, The Blue Note, The Jazz Gallery, Joe’s Pub, The Tribeca Performing Arts Center, Sweet Rhythm and Smoke, and the 55 Bar. He teaches at The Aaron Copland School of Music, The New School, and the Prince Claus Conservatory in Groningen, Holland.

Grammy-nominated organist and winner of Downbeat Magazine’s 2016 rising star poll, Pat Bianchi has established himself as one of the premier organists on the international scene today. His command of the instrument, harmonic prowess, rhythmic intensity and versatility are rivaled by few. Along with leading his current group, he performs regularly with jazz guitar icon Pat Martino and also was a long time member of NEA Jazz Master and saxophone legend, Lou Donaldson’s quartet. While having the honor to perform with such greats as Red Holloway, Terell Stafford, Peter Bernstein, Joey DeFrancesco, Dakota Staton, Ralph Peterson, Tim Warfield, Chuck Loeb, Mark Whitfield and many others. Bianchi has released six CDs as a leader and is a featured artist on over 30 recordings. His newest release, “In The Moment” features an array of guests including Pat Martino, Kevin Mahogany, Joe Locke, Peter Bernstein, Paul Bollenback, Byron Landham, and Carmen Intorre, Jr.

Paul Bollenback started his music career in 1981, and has performed as a sideman with a wide range of jazz luminaries, including artists as diverse as Stanley Turrentine, Jeff “Tain” Watts, Steve Gadd, Gary Bartz, David “Fathead” Newman, Terri-Lyne Carrington, Joe Locke, Jack McDuff, James Moody, Jim Snidero, Charlie Byrd, Herb Ellis, Paul Bley, Geoffrey Keezer, Mike LeDonne, Carol Sloane, Gary Thomas, Grady Tate, and in the group East Meets Jazz with the renowned tabla virtuoso Sandip Burman, to name a few. He is known for his versatility, and also for an influential 20-year stint with jazz organist Joey DeFrancesco. Bollenback performs on over 80 recordings as a sideman, and has released 8 CDs as a leader. A busy performance schedule has been augmented since the late ‘90s by steady jazz education duties at Columbia University, Queens College, and The New School. Bollenback is also a composer, whose pieces have appeared on Joey DeFrancesco’s “Reboppin’” and on the “Jazz Times Superband” CD. His most recent recording, “Portraits in Space and Time” (Mayimba Music), with his trio, was released in 2014.

See a history of the Jazz Fest’s 29 years of performances here.

The Institute at Renfrew has resumed limited programming in accordance with established COVID-19 safety protocols.
Participants and attendees must read and agree to the guidelines in place.
By registering for the Jazz Festival, you agree to abide by safety measures in place.

Current guidelines for Institute at Renfrew programs:
• Participants will abide by guidelines under the GREEN phase of Renfrew Museum & Park’s reopening plan.
• Participants must observe distancing of 6 ft. while walking, gathering, and whenever possible during the program.
• Mask use is required when indoors, or when 6 ft. physical distancing is not possible outdoors.
• No sharing of program materials, food, or other items with those outside your family/household.
• Please stay home if you are ill, or have been in contact with known or suspected cases of COVID 19 in the past 14 days.

From the PA Dept. of Health: If you travel to the following states, it is recommended that you quarantine for 14 days upon return to Pennsylvania: Alabama, Arizona, Arkansas, California, Florida, Georgia, Idaho, Kansas, Louisiana, Mississippi, Missouri, Nevada, North Dakota, Oklahoma, South Carolina, Tennessee, Texas

Sorry, reservations for the concert at Renfrew Park are sold out.

Although attendance is FREE as always, we hope you’ll help us virtually “pass the hat” to support the 2020 Jazz Fest!

Tickets are not available as this event has passed.